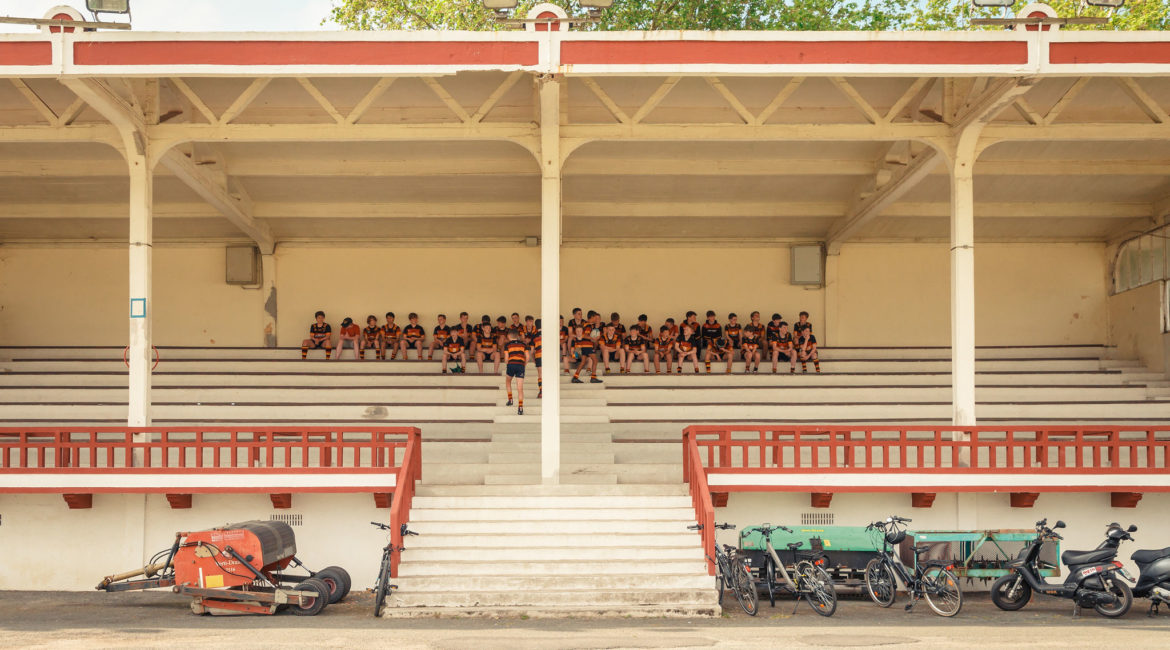 There is no better way to crown a fantastic season than to bring the boys and their hard working parents on a club tour to the South West of France. Biarritz for Lansdowne is an oft visited mecca for rugby with three of our tours this year going to the Basque region. The area is dotted with famous rugby clubs like Biarritz Olympique, Bayonne, PO, Dax and further east of course Toulouse, Perpignan etc. Our U14s visited a week ago and the Senior Tour goes to Biarritz and San Sebastian in June.

We arrived in Biarritz just after 2pm on Saturday and were bussed straight to Rugby Club Tyrosse where we were met with water and pizzas before the lads prepared for their first matches. The A’s and B’s played at the same time against two Tyrosse teams whilst the parents availed of a couple of pitchers at the sidelines and tried to keep an ear out on the Munster match back at home. The two matches were really competitive and played with typical French elan. The French teams love to use the full width and have some real go-to players. Despite the heat, our boys gave it their all and had some real fun. It’s amazing to see the kids integrate so well with not a shred of language between them.

Fed, watered and refreshed, the boys were brought down to the beach for surfing lessons and the parents (at least most of them) got in for a dip. Bettystown it is not, and the water is just superb. We had a fantastic afternoon just relaxing and watching the craic on the water. Unbelievably, the boys didn’t have enough of the water and went straight back to the hotel pool for two hours of mayhem and fun. Little did we know they’d worked up a right old appetite and might have found an errant supply of breakfast cereals and hot chocolate somewhere. Gulp….

From there, it was back to Biarritz where we checked into the fabulous Hotel Le Grand Large right on the seafront where we dropped the bags and back onto the bus for a well earned meal at Le Tavernier where the boys were fed Spaghetti and the parents were given a fabulous chicken (or was it pork?) curry, plenty of the local vino, a few beers and dessert. Back to the hotel for a well earned sleep.

On Sunday, we were up early for our short bus trip to Stade Aguilera in Biarritz where we played Blackrock and the local Biarritz Olympique youths team. Again, some very pacy and wide rugby from the locals who had a couple of massive forwards that made a big impact in the second half. Biarritz won the game but we gave them a run for their money and had them quite worried. They then all hopped on their motorbikes and went home while we hopped back onto the bus and into Biarritz for a fantastic lunch at the same restaurant.

That evening, we all met down at the beach for dinner at the Bar de La Cote des Basques where we were treated to some fantastic local Basque tapas dishes. More vino and a couple of beers where the boys were led in song by Paddy Whelan singing his old favourite. Stevo and Bobby were a big hit with the lads giving them a full length rendition of Bohemian Rhapsody, much to the delight of the locals.

A huge thanks to all our organisers, James Fegan, Elaine Hughes, John and Rachel Martin, Will Keating and Bobby Geraghty. Also thanks to all our sponsors and to the coaches. Well done all. Many thanks also to Con O’Donoghue and Fionn McCann for doing all the photos. Thanks to our Travel Partner RugbyandFrench.com

At the end of the day, this tour is a thanks to the boys for putting their hearts and their souls into their club rugby. Each one of them utterly deserves the trip which we hope they’ll remember for a lifetime. LFCTID !

Enjoy the break. See you all in September.