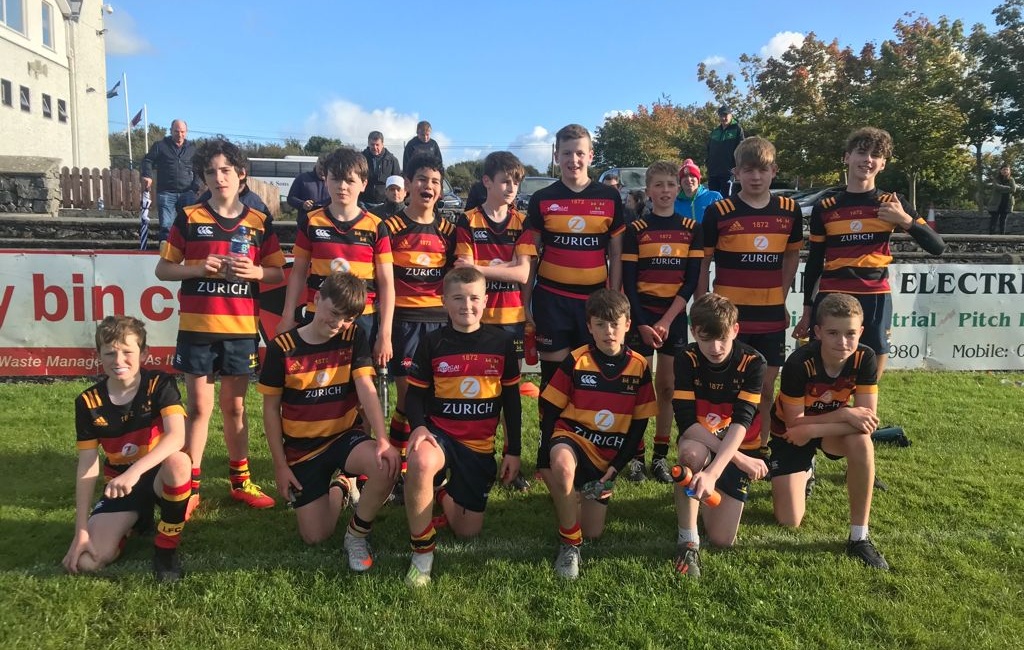 After postponing the initial trip for few months, the U14s finally took to the road at the weekend for an overdue trip to the West of Ireland. Having been grounded for such a long time, the level of excitement was noticeable when the group left Lansdowne HQ on Saturday morning direction Galway.

First stop – Corinthians’ ground for our first match of the weekend. After more than 2 hours on the bus (combined with the mandatory stop to Supermac’s on the way), the boys were raring to go against the Connacht’s opposition. Warming-up under some heavy rain didn’t stop the overall enthusiasm of the group (it wouldn’t be a tour to the West without any rain!) – as the boys showed a very high level of energy as soon as they hit the ground running (despite bellies full of burgers & chips).

As a good omen, the sun started to shine just before kick-off. Thanks to a try scored on our first attack, we settled into the game smoothly – with the drier condition allowing us to play the Lansdowne way. On the back of a very strong performance from our forwards (fighting every single inches and clearing rucks like if there was no tomorrow) – our talented backline was unleashed and we took control of the game in the early stage. Corinthians fought back in the second half and scored a few tries towards the end of the game – but we kept our lead, and the final score was 59-15 for LFC.

An impressive first win for the group! Our hosts threw a great spread for the boys after the game, and offered us a Connacht jersey – which was presented to our new player John, as a reward for his first try scored for Lansdowne (after only playing his third game of rugby).

It was then time to regroup at the hotel in Galway. As the pool had been booked for us, the kids were able to get rid of whatever energy was left after the game. Once a rugby ball was thrown at them, the recovery session quickly turned into a brawl as the boys created a rugby version of water polo. This was followed by a really great night for the kids, coaches and parents.

On Sunday morning, a tired party got on the bus to take on Buccaneers in Athlone for our second game of the weekend. Once arrived at the Buccaneers ground, the adrenaline had kicked in and the boys were ready to show that they can play really hard even after such a big night. It only took us few minutes to take the lead – and as a repeat of the game vs. Corinthians, a stellar performance from our forwards allowed our backline to express itself. As a result, we cruised through the game for another impressive win 68-10 vs. Buccaneers.

As soon as the game was over, no time to waste as we had to get on the bus for our last part of the tour…A go karting session for the boys in the midlands. It was a great to finish the trip with a really fun bonding session. Kids had a great time and demonstrated that competitiveness does not stop on the rugby pitch.

Thanks again to Malachy, Darren and Enda for putting so much effort in making this trip happened. A real success on and off the pitch. Fantastic memories for the kids, parents and coaches. A bonding weekend at its best – which will definitely bear fruit in the coming months.