Valuable four points for Lansdowne in 17-10 victory over Garryowen 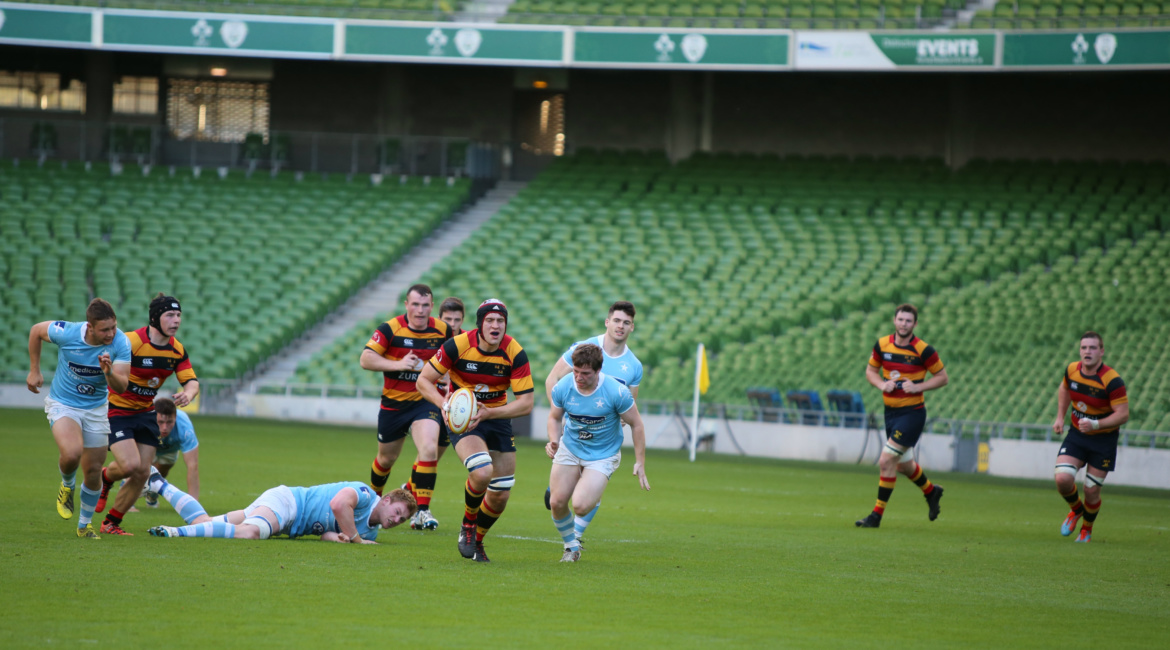 Lansdowne enjoyed their first outing of the season on the Aviva Stadium main pitch on Saturday last in a match that served as a fine prequel for the RWC final later in the afternoon.

Loose head prop Peter Dooley returned from Leinster duty to anchor a dominant scrum, and the home lineout showed vast improvement over previous outings, providing a reliable source of good ball. Dooley exercised a strong stabilising influence on the Lansdowne pack, and had an excellent match in all aspects of the game.

With dominance in the tight pretty much throughout, once they overcame early spirited resistance from a game, if limited, Garryowen outfit, the outcome was never really in doubt, and the 7 point final winning margin in no way flattered Lansdowne.

The match started off at a frantic pace, but both sides lacked control and errors abounded. Lansdowne won a penalty in their first scrum, but were then penalised on Garryowen’s first put-in.  The home backs were willing to run the ball from every position, and looked to have the edge over their opponents, with wing Mark Roche and Tom Farrell in the centre always threatening with ball in hand.

There was no score in the first quarter as both sides’ defences were on top, and home flanker Joe O’Brien was sin-binned in the 20th minute for batting down a Garryowen pass – the ref had chosen to ignore an identical infringement by the visitors only moments previously.

Garryowen took advantage of their numerical superiority to open the scoring from the subsequent penalty by scrum half Neil Cronin from 37 metres out on the left. Despite their reduction in numbers, Lansdowne were beginning to crank themselves up, and they were unlucky to be called back following a clever blind side line-out move which would have resulted in a try.

Garryowen blind side Shane Buckley then joined his opposite number on the side line for 10 minutes as Lansdowne exerted strong pressure on the visitor’s defence and, with home numbers restored, they duly scored the first try of the afternoon just before half time when talented Leinster Under 20 flanker Max Deegan went over off the back of an advancing five meter scrum. Lansdowne’s decision to take a five meter scrum from a penalty against the Garryowen pack was thus rewarded and captain Scott Deasy duly added the extras for a 7-3 lead.

There was still time for centre Farrell to show his class with a fine cut and pivot out of the tackle, but the half time whistle intervened, with Lansdowne having struck a strong psychological blow to carry over into the second period.

Lansdowne maintained their momentum after the restart, and kicked a penalty deep into the Garryowen half after just 2 minutes play. From the subsequent lineout drive Lansdowne were awarded a penalty in front of the posts, but again opted for the scrum. Two penalties later, referee Stuart Gaffakin walked under the uprights and awarded a penalty try to Lansdowne, which was again converted by Deasy for a 14-3 lead to Lansdowne.

Lansdowne’s confidence was growing, and they launched promising counter-attacks off two quick turn-overs of Garryowen possession, with full back Eamonn Mills prominent. Centre Farrell continued to threaten, and was unlucky not to link up with his partner Tom Daly with the Garryowen line threatening. Second row Brian Moylett was not to be left out of the action, and set off on a barnstorming run through the visitors defence, but the ball was lost forward.

With Dooley, hooker James Rael and tight head Prendiville turning up Garryowen’s pain, Lansdowne continued to be in charge, but were unable to break down a stubborn defence; Scott Deasy put in a great tackle to blot out a threatening visitor’s attack in the 62nn minute, and Mark Roche set up a great counter attack from deep in defence to again deny Garryowen.

The visitors rallied, but lost sub Liam McMahon to a further yellow card after 72 minutes. Scott Deasy was unable to capitalise on the subsequent penalty from 42 metres, and Lansdowne were almost made to pay dearly when lively centre Andrew availed of a lapse in concentration by the home defence to cross after 78 minutes for a try converted by Cronin to leave the scores at 14 points to 8.

Lansdowne remained in control, however, and Garryowen failed to threaten again in attack. Captain Deasy rounded off proceedings with a penalty from 35 metres out three minutes into injury time to seal matters, with Garryowen gaining a losing bonus point for their efforts.

A valuable four points for Lansdowne, and they now lie fifth in the league. It’s UCD in Belfield next Saturday, with the distraction of the RWC now out of the way. Lansdowne certainly owe College one, having lost to them in all four AIL matches in the past two seasons and, judging by the students excellent 35-3 away win against Galwegians, it will take a mighty effort to unseat them. With your support, however, it can be done!