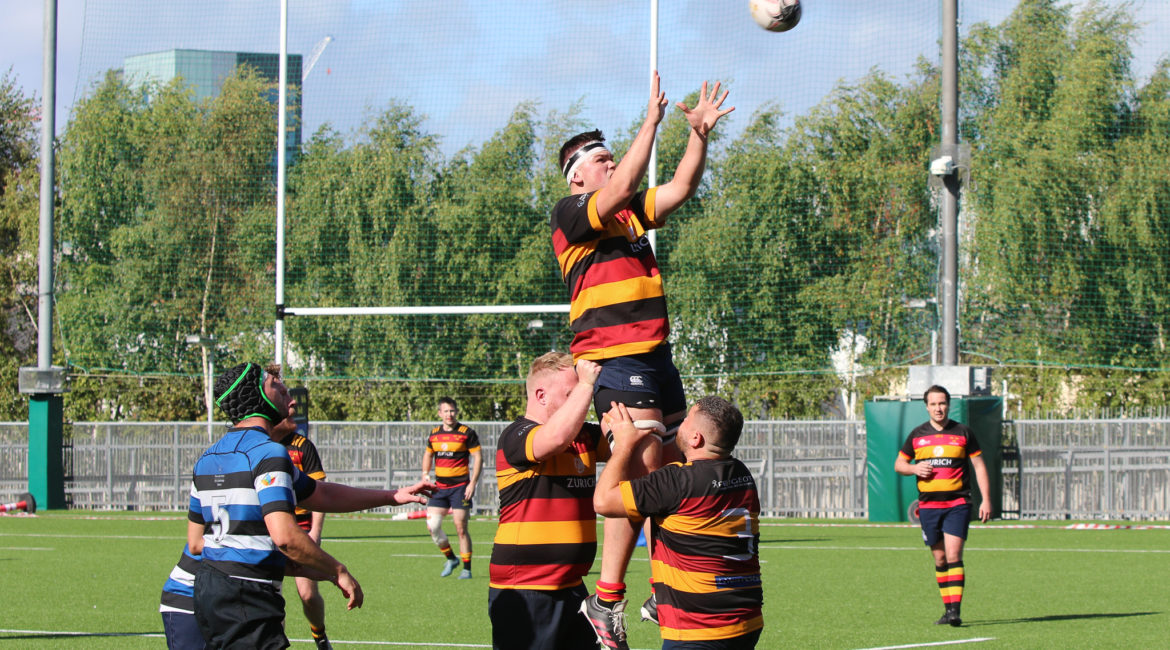 On a special weekend for the club, the management team of Junior Rugby, led by director Ian “Beanser” Hopkins asked the players of the J2s, J3’s and J4’s to deliver something special.

And didn’t they just.

With an aggregate score of 134 points for us to 12 against, Dave Tunney’s, Mark Quinn’s and James Caslin’s J3’s dispatched Monkstown on Friday night, Adam Currie’s J4 saw off Barnhall on Saturday afternoon and on Saturday morning the J2s crowned the preparations for the 150th Gala Ball with a resounding victory over nearest neighbors, Wanderers.  If ever there was a sign of the rude health of Junior Rugby in Lansdowne, this was it.

Straight from the kick-off of this Leinster League Division 2 match, John Sparks’ and Ross Barry’s J2s worked their way to the Wanderers’ danger zone with some powerful forward line breaks, Charlie McSweeney and Conor Horan menacing the central defences, while back three players like Kevin O’Connor threatened them out wide.  Very early in the game, talisman and number 8, Donal Liddy left the field injured, but was very ably replaced by Jerry McCabe who protected and dovetailed excellently at the back of the scrum with his half backs. It took us 15 minutes to break down the Wanderers’ stout defences, but with their lines spread so thin, there was a certain inevitability about the way scrum half and captain Rob Kelly cut through a gap and sniped over for our first try.  Rob’s half back partner Will McEvoy converted to make it 7 – 0.

It wasn’t much longer before that tally was doubled as the speed, variety and penetration of our attack was too much for the neighbours.  Half backs, Rob and Will played like “two jerseys – one head”, swiftly distributing the ball from the base of the scrums and rucks almost without having to look up. After one such attack, the final “coup de grace” was delivered by full back, Daragh Dennehy who had a simply awesome game.  Will converted again, 14 – 0.

Another five minutes of relentless attack and the now reeling visitors conceded another try, this time with new arrival to the club, winger Patrick Kyne going over in the corner for his first of no doubt many tries for Lansdowne. The touchline attempt proved no problem for on-fire kicker Will as he slotted a perfect long-range conversion.

Half time came before we could capitalize further on our dominance, but none of the home supporters were disappointed with a mid-way score of 21 – 0.

And those supporters would only have to wait ten minutes into the second period before our fourth and bonus-point winning try.  It was a second for Daragh Dennahy, his modest stature belying a steely strength and determination. Will Mc did the honours yet again and it was 28 – 0.  At one point, Daragh called apologetically over to the coaches on the line, saying he wasn’t sure of some of the calls. Ross Barry shouted back, “For God’s sake, change nothing in your game! … Even if that means never learning the calls at all!”

To the credit of Wanderers, they never rolled over. Were it not for our robust and disciplined defence, they might well have come back into the match earlier. Notably heroic defenders were hooker Rory O’Donnell and centre Bill McNamara, who tackled, got up, tackled, got up and tackled again and again. We turned over the ball from several of these defensive periods, and it was from one such turn over that delighted second row Aaron Daly broke through and scored our fifth try of the morning. His delight was shared with supporters and team mates alike! 35 – 0 as we hit the hour mark.

And yet there was more in the tank.  Confidence and joy in the game encouraged adventure and perhaps the weekend that was in it meant there were very few mistakes. Phase after phase of champagne rugby passed and finally, centre Alex McEvoy went over in the corner for our final try of the day. Some suggested that he could have come in closer to the posts to aid brother Will’s attempt, but so confident was he in his sibling’s form, that he set it down neatly in the corner. “No problem”, said Will and he struck the conversion beautifully again from the touchline to make it seven out of seven and 100% hit rate. This brought it to 42 – 0 as we entered the last ten minutes.

Full marks to the Wanderers team, they never stopped playing and their resilience and indeed sportsmanship were rewarded with two late tries, one of them converted.  But they just came to Lansdowne on a weekend when no Junior team was likely to be beaten and the final whistle went at 42 – 12.

It’s hard not to mention any one of the 20 lads who made this such a great performance, but the season is just getting warmed up, lads … and they way you played on Saturday, you’ll get your chance before too long! 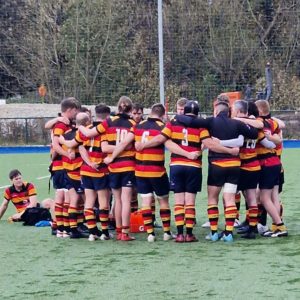 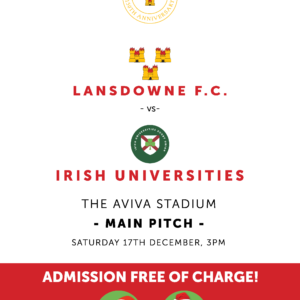 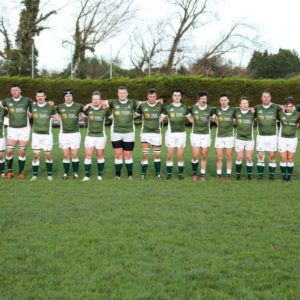