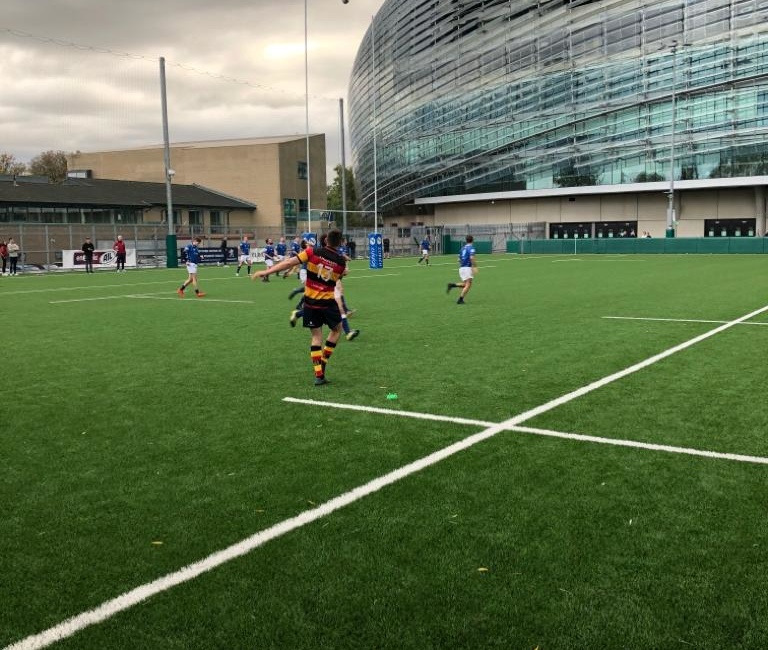 Yet again Lansdowne J2’s came up against a far bigger pack that dominated set pieces, but on Sunday on the back pitch we persevered with our more open, faster attack and brave defence, and this time we came out worthy winners.

The opening 15 minutes were a flurry of attack and counterattack with the visitors struggling to contain our speed and aggression in attack.  Had the accuracy and timing of our passes been little sharper in those opening salvos, we would have been the first to adorn the scoreboard.  As it was, Marys’ regained most of possession and took up residency inside our 10-metre line, launching attack after attack on the line until eventually a gap emerged and they went over for a try on 18 minutes.

Alex Caslin summed up how unphased Lansdowne was when he slotted over a long-range penalty three minutes later, keeping the visitors in sight. 3 – 7.  After another ten minutes this formula was repeated almost exactly with Marys’ pack providing a solid platform for another wave of attacks that resulted in their second try, followed by another penalty conceded within kicking distance and “Caz” doing the honours again. 6 – 12 on the half hour mark.

Maybe Marys’ larger units were starting to tire, or maybe our lads were now finding their timing and passing accuracy, but the period before half-time belonged to us. Now we took up residence in their 22 and attacked short and wide, with half backs Gareth Molloy and Peter Fitzgerald varying the point of attack, and exciting new arrival, Rory Cunningham always threatening the gain line. Eventually, and on the stroke of half time, full back Shane Donnelly kept his try rate up for the season with an excellent finish in the corner. Yet again, “Caz” nailed the conversion from the touchline giving us the narrowest of margins at the break.  13 – 12.

After ten minutes of feverish exchanges, the opening score of the second half went to Marys, following a clinically set up and executed rolling maul. 13 – 17. It was the first of many mauls we would see from the visitors who seemed to lose confidence in their backs as the second half wore on. They definitely lost confidence in their kicker, as he missed three penalties and two conversions on the day, while our man’s boots were pure gold.

As if to prove it, another series of rucks and mauls, wide and tight, finished with a well taken try in the corner by sub Michael Fitzgerald.  Yet again, Caz struck it beautifully and converted from the touchline.  20 – 17 with ten minutes to go.

After a lengthy interruption while the ref was treated for cramp, we were told there were just three minutes till the final whistle and Marys, like the true competitors they are, went into overdrive trying to win back the ball.  We seemed to have done enough “up the jumper” rugby, when we conceded a penalty for crossing with one minute to go. Marys took it quickly and for once every one of their players handled the ball as they made swift progress in several phases going from within their own 22 to the edge of ours. But their over eagerness was their undoing as a second row flung a wild pass back in field as he was being driven into touch by wing-forward Luke Briody and Brennie O’Malley gratefully intercepted and sped back down the pitch cancelling out Marys advantage and with it their hopes.  He was eventually caught and from the ensuing ruck, sub scrum-half Rob Kelly kicked it safely into touch.  Game over. Brennie would later modestly say, he nearly scored but “it took the fastest man on the pitch to catch me!”

An excellent and well-deserved result following great performances not just in this game, but in the two near misses that preceded it.

Things are looking up.

(Photos – Ref gets a leg up from our generous Physio and 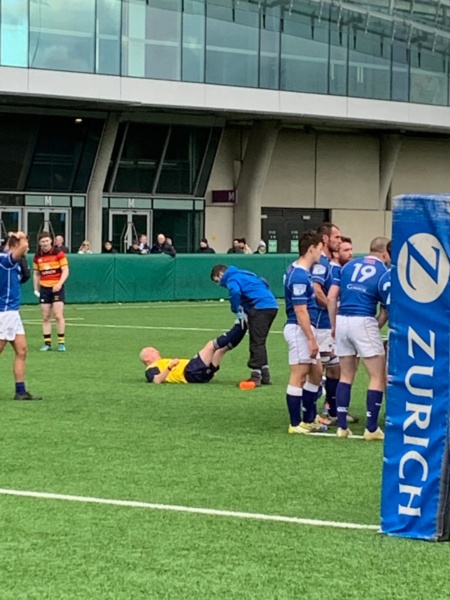