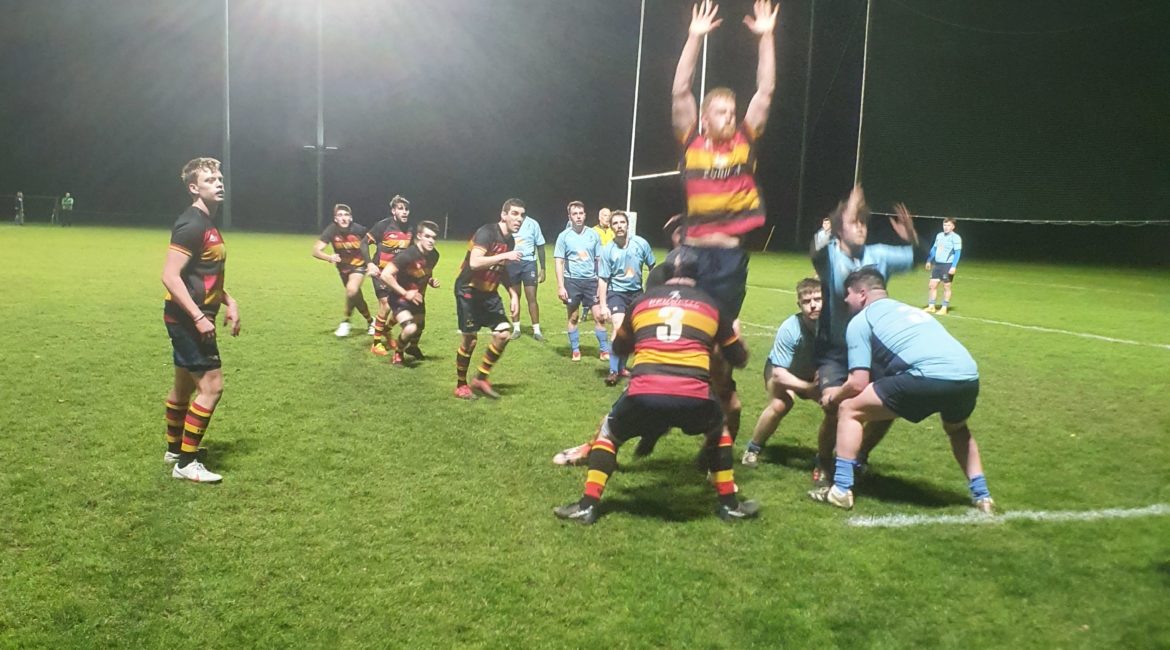 Ah, the fickle finger of fate … or the various vicissitudes league campaigns … Whatever way you look at it, it was a tough end to an excellent campaign by this J3 squad to miss out on a place in the league play-offs by just one point.

But a couple of missed bonus points here and there and one particularly unfortunate loss at home to St Marys before Christmas allowed our shot at the title slip through our fingers.

So, it was just pride and love of the game that saw the J3 crew take to the field once more on a chilly and windswept Maynooth campus.  With the final game on the other side of the league being conceded, nothing depended on the outcome of this game. Indeed, the Barnhall coach was heard to remark “looking at the way your lads warm up, we wish this game had been cancelled too!”

And he was right to be worried. From the moment Rob Troy kicked off, we used our wind advantage well and pinned the students down in their half, patiently rummaging through our bag of surgical tools to see which was the one that would make the first incision.  Would it be a break through the centre from our battle-hardened duo Josh “no-sweat” Healy and Thibault “T Bone” Fravel? Not tonight, as their opposite numbers were the strongest element of the Barnhall side. Or would the first cut come with an attack from somewhere in our mobile back row of Alexis “Sexy Lexy” Pavier, Capn’ Rob Timlin, or possibly a real Captain (he’s in the army), Dave Kavanagh?  Not just yet. First blood came after ten minutes from lock Evan “Fuzz” Fenton.  Following game after game of helping create tries for others (see earlier reports), tonight he finally snapped and said, “feck this lads, I’m having one myself”. A penalty was called just outside their 10 metre line and while the home side greeted this as a well-earned rest following our relentless attack, Fuzz surprised them (and his own team, to be honest) and just tapped and went, driving over the line with a few bewildered students dangling off him.  Rob converted and away we went.  0 – 7

The next try came not long after and involved nearly every Lansdowne man on the pitch. After the restart, scrumhalf Alex “Dilly” Dillon gathered from the maul, chipped over their advancing defensive line into the space behind, allowing Josh and TBone power through, ably supported by the other hard-running lock Conor Horan.  Conor added 20 metres to his overall tally with the ball of about 2km for the night but was taken down 15 meters from their line. From the ruck in the corner, Dilly quickly recycled the ball which went swiftly through the hands of the back line, with full back Jack “nickname-pending”* Carrigy joining the line at pace and nearly making it over in the corner.  And he might have scored, but he probably thought, why risk it?, and almost without looking, he switched a pass bask inside to the support he had come to expect would be there. And indeed it was, in the shape of number eight Dave Kavanagh who took the pass inside and battled his way over line for yet another great team try and one Dave clearly enjoyed.

After such innovation and creativity, it was time to deploy some good old-fashioned strength and organization tools for our last try of the half, with hooker, Luis Castro finishing off his own excellent lineout throw and maul that followed, touching the ball down in the corner.  Rob obliged yet again from a distance, and we went into the half time having taken good advantage of the wind, 21 points to the good.

If any of the more nervous readers are worried that the home side would turn the tables with the wind behind them, fear not.  From the restart we were indeed pinned back on our line, but we worked our way out doggedly and after about 12 careful phases, we were inside their half, their defences starting to wilt.  The ball emerged from a ruck in the middle of the pitch and replacement scrumhalf Conor Clery switched direction at the last moment (now his signature move) to the right hand side.  The first pass was to replacement out half Jack Connolly who broke through the gain line himself, releasing Josh. Josh had a lot of work to do as his 25-meter run to the line involved breaking tackles and eventually carrying the last few hapless defenders over with him.  Cormac O’Mahoney converted with one of his also signature mis-hits, but the kick was good and the bonus point secure, 0 – 28.

The game was over as a contest but the Barnhall guys never stopped battling. They scored an excellent break-out try and never held back in defence, with some fierce but fair contacts in the tackles.  Indeed, when Jack Carrigy took one ferocious hit and was down on the ground for a while, one comment was overheard from the sideline … “That must have been a big hit to keep Jack down so long. He’s a hell of a tough lad, for someone with such wavey hair!”  (*Maybe there’s a nickname in there somewhere!?)

Another great win and great performance from a group of players and coaches that do immense credit to the club on and off the pitch. Hard luck in the league lads, but well done overall.

Let’s put it right in the cup.