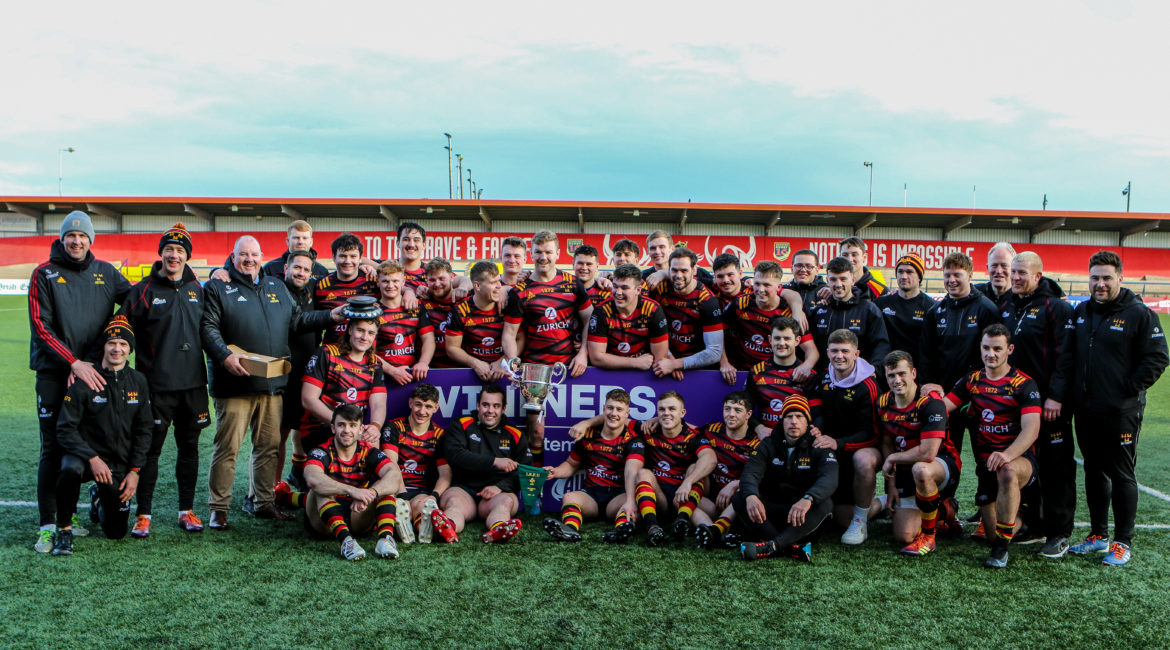 What a fantastic result for Head Coach Mark McHugh and his assistant coaches, Phil Horan, Mark Flanagan and Damien McCabe!

A superbly prepared Lansdowne side took on and bested a gallant but ultimately inferior Young Munster team in this season’s national club cup final.

That the Bateman Cup finale was played in Cork  (and thereby hangs a tale) a hundred years after the first competition in 1922 – also won by Lansdowne – was, in many ways, appropriate – the Batemans were, after all, a Cork family.

A wet and windy Musgrave Park greeted the two teams and Young Munster played with the wind – and heavy rain – in the first half.

The Limerick side were first out of the traps and used the elements to pin the Headquarters side in their ’22 for the first quarter of an hour. Impressive and resilient Lansdowne defence – a hallmark of their performance throughout – denied several attacking thrusts and all the Munster Champions had to show for their territorial dominance were a brace of penalties from their ace kicker, out half Evan Cusack – 0-6 after 11th and 13th minute strikes.

Lansdowne didn’t get over the half-way line until the 17th minute of the match but, when they did, it was explosively. Scrum half Cormac Foley – this scribe’s Man of the Match – made a great break down the left. The ball was recycled quickly and then spun right for right winger Michael Silvester to outpace his man and stretch for the line.

The kick was missed, but the try had an immediate effect on Lansdowne morale and they renewed their defensive efforts with vigour as the Cookies again came hunting.

Pressure was mounting on the Lansdowne defence as two scrum penalties were conceded with the Munster’s loose head appearing to get away with boring in on the Lansdowne hooker, Luke Thompson.

Relief was achieved when the referee gave a scrum free kick against the Limerick side on the Lansdowne 5 metre line and the ball was cleared downfield. Munsters had chosen to take a scrum from a penalty and their disappointment at the outcome was palpable.

Lansdown made only their second foray of the half into the Young Munster ‘22 in the 32nd minute. Again, the outstanding Foley led the charge, and almost put centre Andy Marks clear. The attack was redoubled with No.8 Mark Boyle and blind side Clive Ross carrying well to carve open the Munster’s defence.

Boyle raced onto an inside pass from Foley and breached the defence. He slipped the ball to the supporting Marks and Lansdowne’s outside centre made no mistake to cross for his side’s second try amid the torrential rain. Full back Stephen Madigan put over a great conversion across the wind from wide out to put his side 12-6 ahead.

The Dublin side held out for the rest of the half and were quietly confident to be leading with the elements in their favour when hostilities resumed following the break.

Young Munster attacked immediately from the restart but were again rebuffed by solid Lansdowne defence which yielded a turn-over penalty as Cookies second row Tom Goggin rolled too far on the ground.

Lansdowne used the penalty to get into the Munster’s half. From the lineout, winger Silvester again showed his pace coming into the line from the blind side and breaching the defence. He slipped the ball to his left-wing colleague, Sean Galvin, who scampered down the wing for a great try and a 17-6 lead after 44 minutes.

Lansdowne immediately went on the attack again and out half Peter Hastie, who was becoming more and more the playmaker as the game progressed, took advantage of a Young Munster penalty concession to put his side ahead with a well-struck kick from 28 metres.

20-6 ahead by the 53rd minute and Lansdowne were purring. With second rows Dan Murphy and young tyro Ruairi Clarke putting in the hard yards and the front row starting to dominate their opponents in the loose, the back row of captain Jack O’Sullivan, Ross and Boyle were also beginning to prosper.

On the hour mark Hastie made a delightful break, sending centre Kiernan away and the Cork man returning to his native heath made no mistake to cross beside the posts. With Hastie’s conversion the Headquarters side were now 27-6 ahead.

Young Munster began to wilt under the incessant pressure which was a hallmark of the Lansdowne effort – in possession, they were harried into mistakes and knocked back by relentless first-up tackling by the Dubliners.

With the ball drying, Lansdowne started to spread it around. Kiernan, Hastie and Foley all threatened to breach the stretched Munster’s defence before a beautiful move saw play to the Cookies 5m line; Foley and Boyle having again done the damage, the ball was moved wide by Kiernan to Galvin for his second and Lansdowne’s fifth try – 32 – 6 after 63 minutes play.

Lansdowne continued to dominate, with Silvester almost in after a great run and replacement Corey Reid – making a welcome return after injury – almost in for tries.

From Reid’s close effort, the ball was recycled to Hastie, who jinked over for a well-deserved try which he converted himself for 39-6 in the 70th minute.

Such was the momentum they had built up, Lansdowne still didn’t take their foot off the throttle. Three minutes later winger Galvin again showed his genuine wheels when evading several tiring Young Munster defenders to speed away for his third and Lansdowne’s 7th try under the posts, which was converted by Madigan for 46-6.

There was still time for one final act of defiance from a brave, if outgunned, Young Munster side; in injury time replacement prop Paul Allen showed a great turn of pace to set up winger Conor Philips (fittingly, as he was his side’s best back) to cross for a consolation try which was converted by replacement out half Cian Casey. This gave a final score line of 46 points to 13 for Lansdowne as referee Peter Martin blew for no side.

Lansdowne thoroughly deserved their 7th Bateman Cup success which was founded on a powerful display of pressurised defence when required. When combined with the capacity to unleash their dangerous backs, this presented a lethal combination for which Young Munster simply didn’t have the answers.

While all seven tries were scored by the Lansdowne backs, the pack too, played its part in coming to terms with a powerful Limerick unit and, ultimately, outplaying them.

Lansdowne now move ahead of Cork Constitution with 7 Bateman Cup successes and the benchmark has indeed been set for the rest of the AIL League campaign.

Winning head coach Mark McHugh was naturally delighted with his side’s performance: “We knew coming down here it was going to be a really tough ask against a good Young Munster team,” he said.

“But we stayed composed. We were brave. We played really well. We knew we had to play with lots of speed and we did that. We’re just delighted to get the win. It’s a really important fixture for us.”

“It’s a massive day for the club’” said delighted Lansdowne captain Jack O’Sullivan.  “It was a team effort and we’re absolutely delighted to get the win over Young Munster. It was a tough game today. I don’t think the score really reflects where they are as a team, but we’ll take it.”