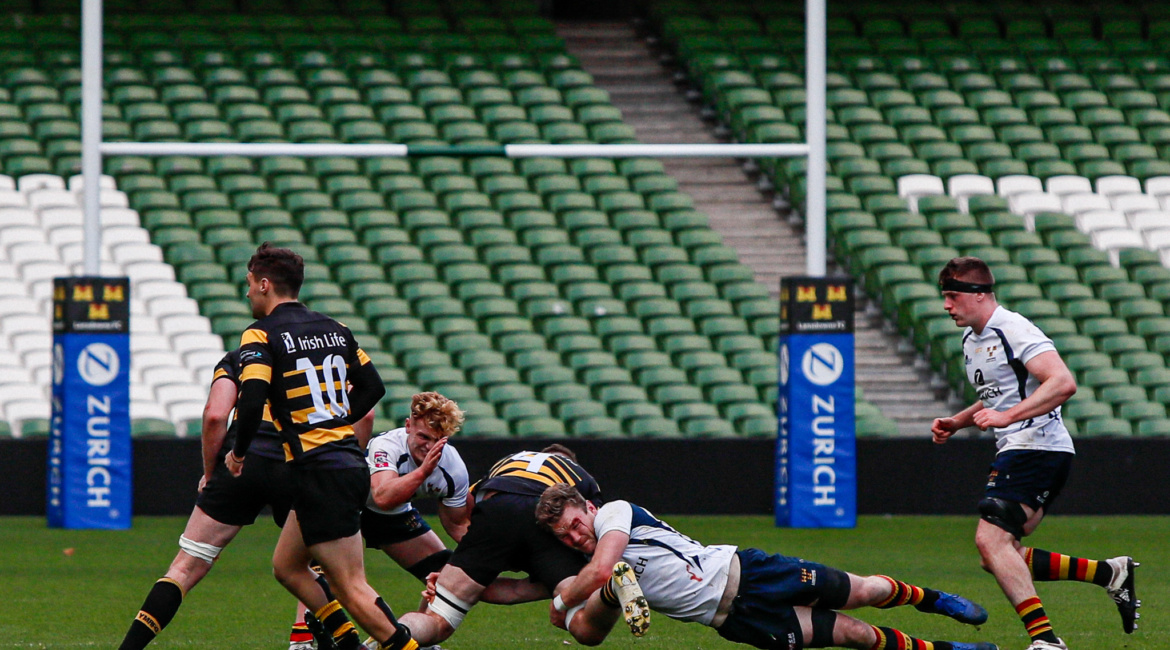 As an advertisement for the Energia-sponsored AIL, they don’t get much better than this.

Two sides totally dedicated to their respective causes, both unbeaten and determined to keep things that way.

Lansdowne’s preparations were disrupted before the start as Michael Silvester injured himself and had to be replaced at full back by Liam O’Sullivan.

Played in near-perfect conditions, this was a slow burner, both sides not wanting to give an inch or set a team mate up for a hard hit, for there were many of them as both defences stood tall in the early exchanges. Lansdowne used the chip over/through the visitor’s defence several times as an early option and, though it created some panic in the Young Munster defence, the tactic didn’t yield the all-important breakthrough.

Lansdowne had the early territorial advantage but didn’t capitalise on it. They used several early penalties to set up chances in the Cookies ’22 but line-out problems re-surfaced.

The home side’s only return for their early pressure was a well-struck penalty by out half Charlie Tector after 13 minutes.

Lansdowne were unable to capitalise further and, following a 55-metre thumper from right winger Conor Hayes which was just wide and a closer in effort by out half Evan Cusack, the latter levelled affairs with a penalty in the 29th minute for 3-3.

The kicked penalty was a controversial award, Young Munster tight head Conor Skehan being tackled in the air having attempted to hurdle Jack O’Sullivan’s tackle, and the frustration of the home players at the decision was palpable.

Early sparring, so to speak, over, the game subsequently sprung into serious action. Munsters, who had looked sharp on limited attacking ball in the early stages and who were prepared to run the ball from almost anywhere, broke the try-scoring ice with an incisive breakthrough.

The five-pointer was scored by ex-Connacht winger Conor Hayes – a ringer for our own Peter Sullivan, currently with the Western Province – which saw him take an inside ball from Cusack and arc at pace outside full back Liam O’Sullivan, who could do little about it.

An excellent try to which Cusack added the extras and the visitors were 10-3 to the good after 35 minutes’ play.

This early set back had hushed the home supporters in a big crowd and they were further discommoded when the Cookies took advantage of a penalty line-out in the home ‘22 to launch a series of attacks on an increasingly strained defence.

After several close in efforts the ball was worked wide to Hayes on the right wing and again the pacey winger obliged just as the match entered first half injury time. Cusack struck a great conversion from the touchline and suddenly Lansdowne were staring down the barrel as never before this season at 17-3 behind.

There was still time to make some amends, however; a great surge by second-row Joey Szpara immediately bringing play into the Munsters ’22 where full back Patrick Campbell took one for his team on the ground and was dispatched to the bin for 10 minutes.

Out half Tector duly knocked over the resultant penalty to narrow the gap to 11 points at the interval, 6 – 17 in favour of the Limerick men.

If Lansdowne were to stand any chance, they had to take advantage of the extra man on the resumption. Leinster lose-head prop Peter Dooley came on for the second period and made a significant impact on proceedings. Lansdowne were immediately awarded a scrum penalty and, just as Munsters had following a similar award in the first half,  their heads were lifted.

A great cut by centre Paul Kiernan into the Young Munster ’22 saw him draw the last man and deliver a perfectly-weighted inside pass to replacement scrum half, fellow Leinster player Cormac Foley, who crossed beside the posts to the delight of the home support. Tector added the convert, and it was game on at 13-17 after only 7 minutes’ play in the second period.

Lansdowne were now in full cry, and their confidence was bubbling. Open-side Michael O’Brien, a former Under 20, was everywhere on this, his AIL debut, and he looks in playing style like a blond edition of John Flanagan – in Lansdowne terminology, there can be few higher compliments.

O’Brien’s efforts were matched at the other end of the experience spectrum by Clive Ross, playing at No. 8, who had a superb match, constantly taking the game to the visitors and unstinting in his work-rate.

Two penalties in quick succession took play deep into the Cookies’ ’22 again and the ball was recycled several times before the powerful Dooley forced his way over the line for a power try on 50 minutes. Tector knocked over the convert and suddenly the home team had their noses in front, 20 points to 17.

Tight head Conan Dunne went off injured after the score and he was replaced by Adam Boland.

Lansdowne looked like a completely different side but, to their credit, Young Munster didn’t panic. Restored to full numbers they applied themselves and won a series of penalties which the home side only survived with a brilliant turn-over under their posts.

Lansdowne missed a couple of touch penalties and the visitors took full advantage to launch counter-attacks. One such attack led to a break down the left towards the old Lansdowne pavilion site by full back Campbell, who set up Hayes to cross for his third try of the afternoon which he converted himself to put his side 24-20 ahead in the 65th minute.

There was still time for Lansdowne to reply. A penalty-lineout was won deep in the Munsters ’22, but the ball was again turned over. Some neat inter-passing between centres Kiernan and Reid brought play back into the Cookies ’22, but the movement broke down.

Lansdowne’s best last chance came from a further 5-metre penalty lineout; the ball was secured and a most promising platform was set up close to the line only for the referee to penalise Lansdowne for going beyond the ball. Even the Munsters’ supporters were a bit puzzled by that one, but such is life!

A humdinger of a game, and full credit to both sides for providing an enthralling and memorable spectacle that will long be remembered by those fortunate to have witnessed it.

Next up is a visit across the Liffey to our close neighbours, Clontarf, on Friday night, kick-off 7:30pm. With the Northsiders riding high and unbeaten in the League, another humdinger is in prospect, so don’t miss it!