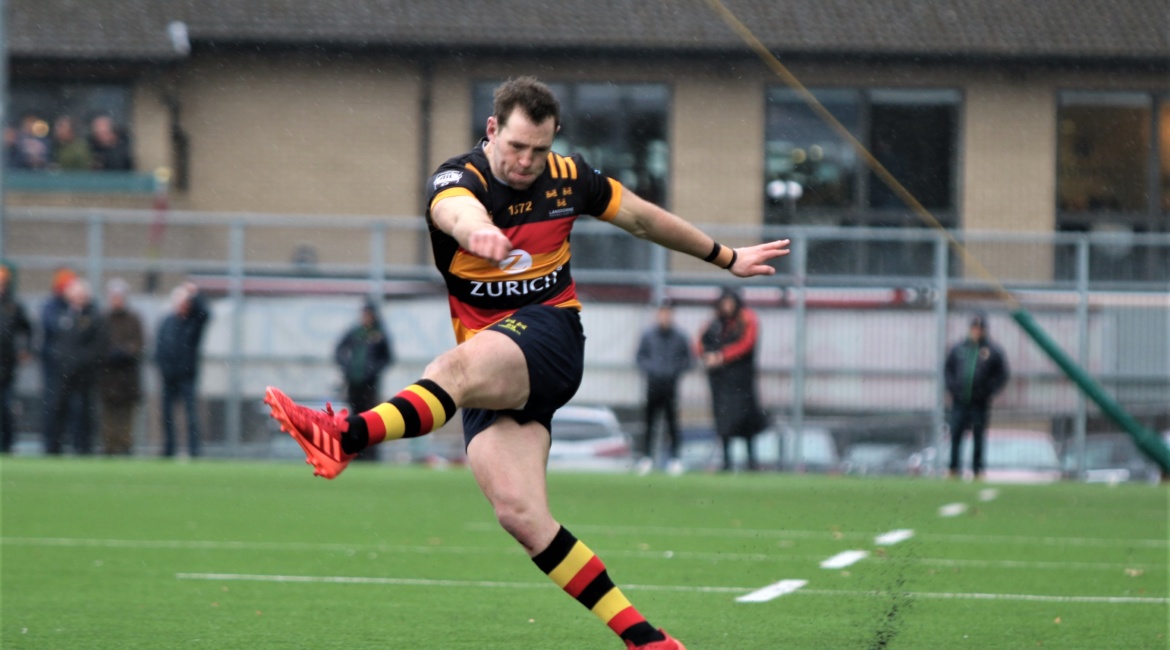 A pig of a day, with storm Jorge arriving just in time to ensure this Energia AIL Division I match became an arm-wrestle, with possession of the ball sometimes proving as much of a liability as an asset.

The notorious Aviva Bowl swirl meant that the wind was blowing strongly in one direction on the river side of the back pitch and the other way on the stand side.

With a combination of increasingly wintry showers and a biting wind this match was, as veteran Lansdowne man Martin Deasy put it, “one for the purist”.

Despite the best efforts of Jorge, both teams sought to play open rugby, although this led to many handling errors and wayward passes on both sides as the conditions took their toll.

Seeking revenge for a 43 points to 5 tonking in the reverse fixture last November, Lansdowne opened brightly, taking advantage of two early penalties to set up a platform in the visitor’s ’22.

Several pick and go carries looked like they might yield results, but a penalty conceded on the ground gave the Northerners relief. Ballynahinch openside Bradley Luney was then yellow carded for taking out the jumper in the line out, but the defenders were able to turn the ball over at the subsequent line out.

The ball was cleared to the ‘Hinch 10 metre line, only for Lansdowne to counter and winger Peter Sullivan showed both pace and power to make it over the line for the opening try after seven minutes’ play.

The visitors came more into the match, assisted by the disruption caused to the Lansdowne side by the early loss of No. 8 Jack O’Sullivan and then scrum half James Kenny shortly before the break. They were replaced by Adam Curry, on his debut, and Tim Murphy, respectively. A sin binning for second row Mark Flanagan didn’t help the Lansdowne cause either as the home defence was sorely tested.

With the home side disrupted, Ballynahinch took full advantage and a period of sustained pressure was rewarded by two penalties kicked by Ulster “A” out half Greg Huntley to put the visitors ahead 6-5, a lead they held at the break.

Only a superb covering tackle by out half Craig Ronaldson, one of two such he made in the match, saved the Lansdowne line as the collisions began to go Ballynahinch’s way. In fact, the home side could consider themselves a little fortunate to be only one point adrift at the interval.

Playing conditions continued to deteriorate, and the bar was doing a roaring trade as many of the spectators sought refuge from the elements. Ballynahinch were enjoying the most of possession but couldn’t break down a rugged and determined Lansdowne rearguard.

As always, hooker Dan Sheehan was to the fore in contact, and he was ably supported by second row Cian O’Dwyer and flankers Mark Boyle and Jack Dwan. Prop Adam Boland was his usual effective self around the pitch, making one clean break, while Under 20 prop Conan Dunne also came on and showed up well in the physical confrontations.

For their part, the visitors were well-served by their second- row pairing of Jack Regan and John Donnan, who lorded the line-outs, while full back Ross Adair was their stand-out in the backs.

Despite the poor conditions, Craig Ronaldson lead his line with great effect, and his tactical kicking displayed a mastery in wind control. His performance in holding the home show together was rewarded with his second Man of the Match award, having also won it last time out against Clontarf.

Lansdowne continued to be wasteful of their scoring opportunities as the half wore on, while the visitors, who had the greater ball possession, failed to use it as effectively as Ronaldson and, when they moved it wide, they were scythed down by a grimly determined home defence.

Ballynahinch were made to pay for their failure to capitalise on a plentiful supply of ball as Lansdowne inexorably moved in for the kill. A drop goal attempt by full back Tim Foley from the ’22 was blocked in the ‘77th minute, but the ball was re-gathered on the 10 metre line and the visitors were penalised.

From the subsequent line out, Lansdowne set up a driving maul. When it went down, the ball was quickly recycled and a series of pick and go drives saw play grind to the now desperate Ballynahinch defenders’ line. Lansdowne surged again, battering their opponents, and the referee raised his arm to signal the winning try.

Unsurprisingly, it was hooker Dan Sheehan who emerged with the pill to register his fourth AIL try in seven appearances this season. Tim Foley knocked over the conversion into the teeth of the gale to ensure the visitors would require a converted try in the few moments remaining as Lansdowne forged ahead by 12 points to six.

Lansdowne managed to hold out the deflated visitors’ final efforts and the Headquarters side had emerged as narrow victors on a day when rugby was, indeed, strictly for the purist.

On a final note, congratulations to Declan Fassbender’s Lansdowne squad on winning the Leinster Under 20 Championship with a match to spare. It was apparent on Sunday in Terenure that many of this fine team are destined to grace the Lansdowne Senior side in the years to come.