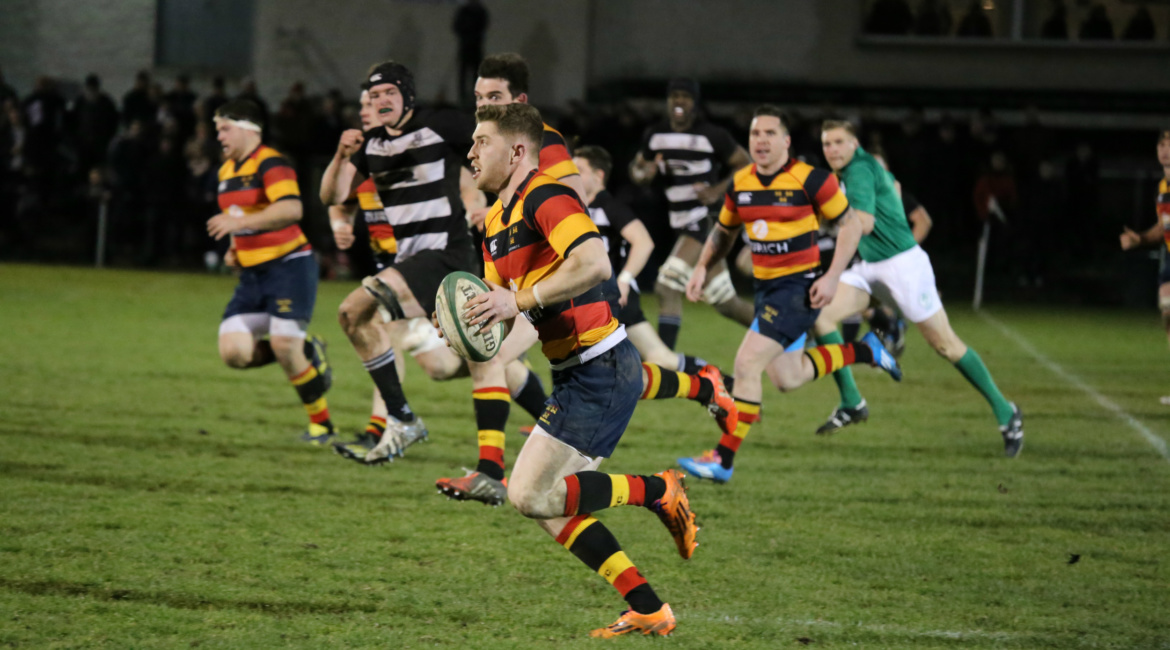 Lansdowne fielded two new caps in Leinster Under 20 back row Max Deegan and last season’s Under 20 player and former Clongowes Wood pupil Cian O’Donoghue on the right wing. Both showed glimpses of their considerable talents and are players to watch out for in the future.

Early on, the game lacked shape and control as both sides sought to seize the early initiative. Flanker Joe O’Brien won a good turn-over after six minutes and play was brought into the home “22, but Lansdowne were penalised at the ruck. Captain Scott Deasy intercepted a pass after 8 minutes, but was unable to transfer the ball and the move fizzled out.

Lansdowne failed to make the most of two early penalty chances when touch was missed, and it was Belvedere who took their first real chance when former Lansdowne centre John Kennedy capitalised on a chip through by his fellow centre Aidan Wynne for the opening try after 13 minutes. The conversion kick was missed, but the home side were beginning to come out on top at the breakdown, and this became a vital area as the match progressed and Lansdowne struggled to come to terms with the lively home pack.

The Lansdowne scrum was an area of strength, but the line out was a source of frustration and failed to provide a reliable source of possession. A good turn-over of the Belvo scrum after 23 minutes led to a promising attack led by centres Tom Farrell and Tom Daly, but dogged defence by the home pack, in which captain Jonathan Slattery was outstanding, kept the visitors at bay.

Further pressure on the Belvedere scrum again saw Lansdowne on the attack, only to be penalised for going off their feet at the subsequent ruck.

Belvo kicked into the Lansdowne half off a penalty, and a subsequent cross-field chip by out half Steve Crosbie saw wing Rory O’Loughlin gather at full stretch and cross for an excellently- worked try in the right hand corner on the half hour and a 10-0 lead to the home side.

On 38 minutes Lansdowne were pulled up for a high tackle and this time Crosbie made no mistake with his penalty effort and Old Belvedere went in at the break with a well-deserved 13-0 lead.

Lansdowne were struggling to match Belvedere up front, and the absence of momentum up front meant that the backs, who worked hard all evening, were seldom on the front foot when possession came their way and they were unable to shake off some solid defensive work by the home side. Scrum half Matt D’Arcy worked hard at the base, but was under pressure and this led to two defensive kicks in a row by the half backs being blocked down as the visitors struggled to clear their lines.

Lansdowne’s best attacking spell saw winger Mark Roche tackled into touch in the corner, and a Belvedere break-out led to play moving to the Lansdowne “22, where Belvo full back Daniel Riordan fired over an opportunist drop goal in the 50th minute to increase the home side’s lead to 16-0.

Shortly after this Lansdowne had a penalty shot at goal from 38 metres, but Deasy was wide with his attempt; this was to be Lansdowne’s only kickable penalty out of a total of 14 awarded to them during the match.

Lansdowne then enjoyed their best period of the match, With O’Brien and Deacon in the back row trying hard and Josh O’Rourke in the second row putting in a lot of effort. All attacks failed to breach the home defence, however, and a frustrating night for the Lansdowne side was sealed when Crosbie kicked a further penalty from 35 meters out on the right to seal the home side’s victory by 19 points to nil.

It was a most disappointing weekend of results for country, province and club for Ireland, Leinster and Lansdowne supporters, but better days will come again.

Lansdowne’s next match is at home to Garryowen on Saturday the 31st of October on the Aviva Stadium main pitch, which is the day of the Rugby World Cup final. Please make the effort to come along and support your side when they need you. Why not book in for the lunch before taking in the match and then watch the final in the clubhouse? Sounds like a great day out!!