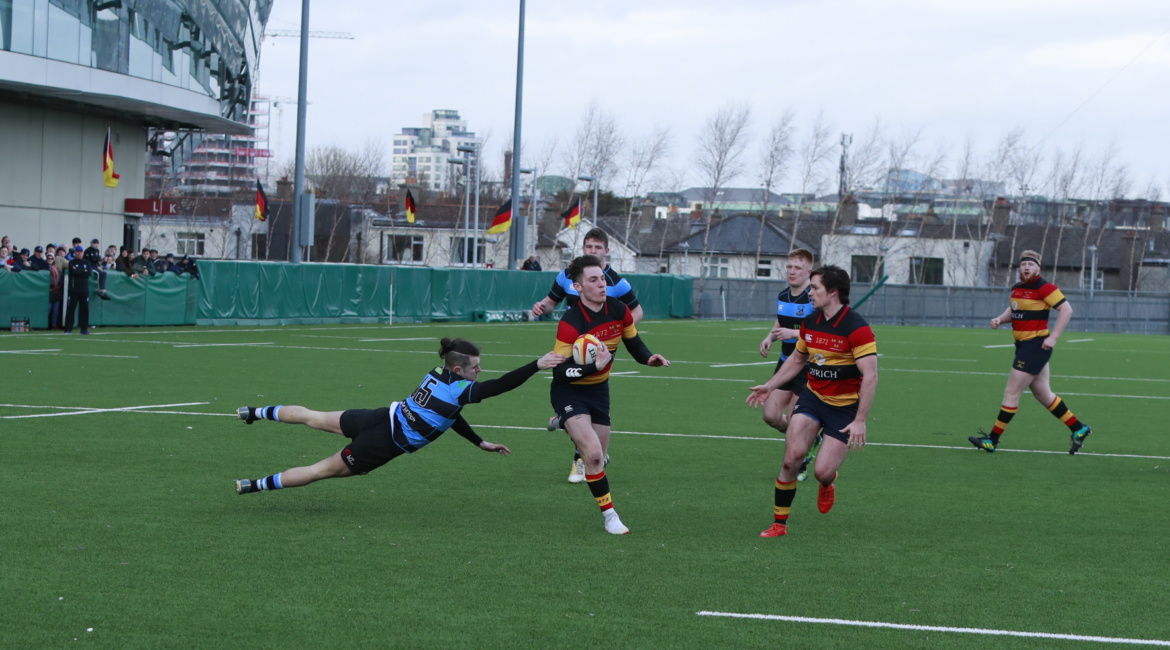 After six seasons in Division 1B, during which they were at one time staring down the barrel of a drop into Division 2A of the AIL, the famous Shannon Club deservedly took their place back at the top table this season.

Record winners of the AIL title on no less than nine occasions, Shannon may not have the players of old, but they do share one thing with their illustrious predecessors from the ‘90’s and Naughties – an un-diminishing spirit and willingness to leave nothing on the pitch.

With a young side, their objective this season is to consolidate their position in Division 1A and build on that platform to vie for success in the coming years.

For long periods last Saturday on the Aviva back pitch they lived up to their coach, Tom Hayes’ expectations, and caused the current AIL title holders a lot of anxious moments before their greater strength, pace and experience eventually prevailed.

On a breezy but cool afternoon, Lansdowne, playing with the elements towards the City end took an early lead through the boot of veteran out-half Scott Deasy, who kicked an opening penalty on the two-minute mark.

If the Lansdowne faithful thought this was to be the prelude to a relaxed and stress-free afternoon, they were sorely disabused of any such sentiments by the Shannon response. A break by out half Fionn McGibney up the middle was carried on by centre Pa Ryan; when the ball was quickly re-cycled in the home ’22 open side Kelvin Browne sent full back Jamie McGarry over for the opening try of the match.

McGibney hit the upright with his conversion attempt but was successful with a penalty on 14 minutes when the Headquarters side were blown for offside directly in front on the ’22 to put his side 8-3 ahead.

The Limerickmen’s direct and robust approach had Lansdowne on the back foot for much of the early exchanges, and it required a considerable effort for Lansdowne to raise their game against their battling opponents.

It took until the 22nd minute before Mike Ruddock’s charges began to put some concerted plays together, and strong-running winger Peter Sullivan, who earned the Man of the Match award, was unlucky to be judged held up over the visitors’ line after good approach work by captain Eamonn Mills, centre Harry Byrne and scrum half Tim Murphy.

The Lansdowne scrum was clearly stronger, but their efforts were frustrated by the referee penalising them three times at the set piece – the second one was simply inexplicable as the home eight drove their opponents back at a five-meter attacking scrum….

Lansdowne didn’t help their own cause with some poor handling and knock-ons while in good attacking positions.

Slowly, inexorably, however, the Lansdowne forward unit were getting on top, with the excellent Jack O’Sullivan, prop Marty Mulhall, hooker James Rael and No. 8 Joe O’Brien in the van, and their efforts were rewarded following good work by Deasy and Brennan when winger Daniel McEvoy was sent over in the corner for his eight try of the campaign.

Eight a-piece at the interval was a fair reflection on a hard-fought and combative contest with both sides showing strong and well-organised defences.

Lansdowne are known as a third-quarter side and, true to past experience, they upped the ante after the break. After only three minutes of the second half their dominant scrum struck a telling blow, and No. 8 Joe O’Brien plunged over for a try which was goaled with an excellent kick across the breeze by Deasy for a 15-8 lead.

Shannon bounced back, and a penalty saw them attacking deep in the Lansdowne ’22. Not for the first time this season, the ever-alert Mills picked off a pass 5 metres from his own line and set sail for the Shannon goal line. Overhauled on the other ’22 by speedy sub winger Ikem Ugweuru, Mills passed to the supporting Sullivan, and the former Ireland Under 20 international motored under the posts for his seventh League try of the campaign.

Deasy’s conversion made it 22-8 after 46 minutes, and this killer blow took a lot of wind out of the Limerickmen’s sails. Lansdowne, in contrast, now had their tails up and began to play with increasing confidence. Another attacking scrum saw some lovely interplay which ended with centre Tom Roche crashing over for a well-worked try after 53 minutes.

Shannon continued to compete gamely and held out until the 66th minute when Lansdowne scored again; Deasy’s chip through was half blocked, the ball fell kindly for Roche and he gratefully accepted his second try of the afternoon. Scottie again obliged with the extras and Lansdowne led 36-8.

Shannon were cursing their bad luck but took revenge when they were awarded a penalty try as Lansdowne dropped the visitor’s attacking maul. Adding insult to injury, hooker James Rael was sin-binned for the infringement. 36-15 with 10 minutes remaining.

A great cameo saw evergreen second row Willie Earle displaying his footballing skills to surge up route one and set up a Lansdowne attack, supported by O’Sullivan, who appeared to be everywhere. The referee, not for the first time in the match missing a knock on, this time by Lansdowne, allowed play to continue, resulting in a 5-metre scrum to the home side.

With Shannon going backwards, the second penalty try of the match was awarded, leaving Lansdowne running out winners by 43 points to 15 in a match in which they had to wear down a game Shannon side before emerging as worthy winners.

Terenure away on Saturday is our next fixture as the men from D6W seek to turn their season around. It promises to be a hum-dinger!