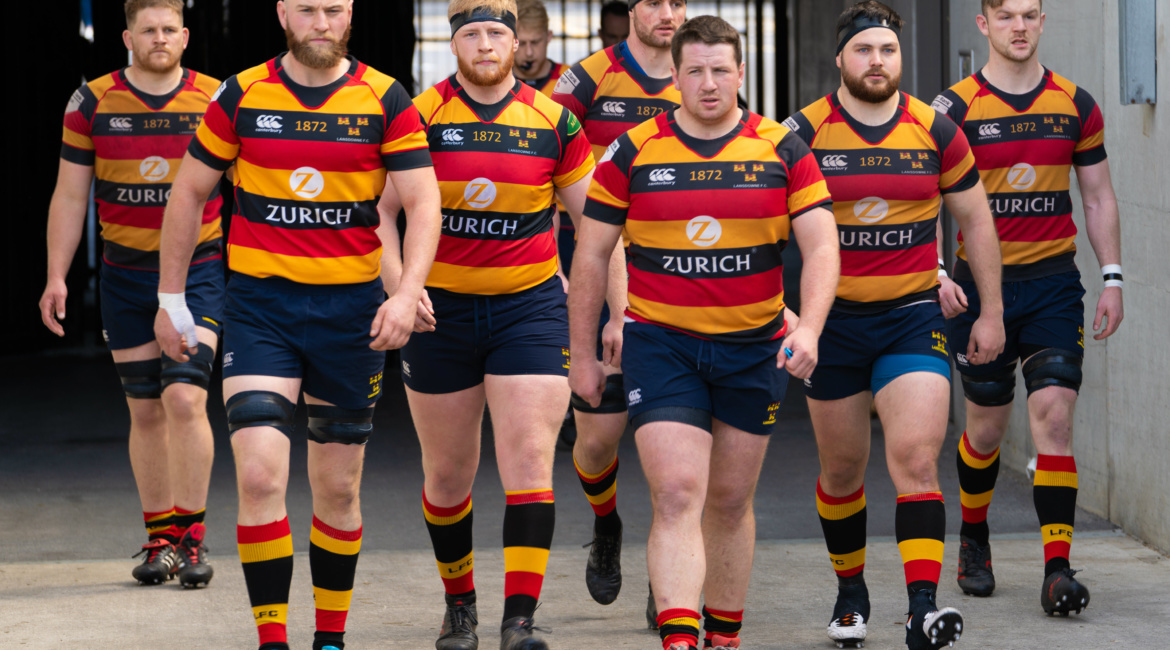 Lansdowne duly confirmed their pre-match rating as favourites to qualify for the Ulster Bank-Sponsored All Ireland League last Saturday. Their success was achieved at the expense of a gallant Garryowen side who threw everything they had at the Headquarters side.

Played in perfect conditions on the Aviva stadium main pitch, a sizeable crowd witnessed a stern contest between two brave sides and, if the final score line was a little flattering to Lansdowne, nonetheless they took all of the chances they created, while managing to frustrate the Limerickmen through great defence on more than one critical occasion.

With Mark O’Keeffe a late replacement for the unlucky Fergal Cleary in the centre before kick-off, Lansdowne opened brightly, winning two penalties inside of the first three minutes, the first from a scrum.

Having set up a good attacking position in the visitors’ ’22, however, they were turned over and Garryowen cleared their lines.

Loose head prop Martin Mulhall shipped an early knock, struggled to shake it off and was replaced on 7 minutes by the redoubtable Peter Dooley. Dooly’s arrival coincided with a good Lansdowne attack with centre Harry Brennan, who had a splendid game, penetrating the line to set up O’Keeffe for a run. Several phases followed, but the move fizzled out.

In the 14th minute it was Lansdowne’s turn to be penalised in the scrum, and ace Garryowen marksman, scrum half and captain Neil Cronin, made no mistake from 32 metres out to open the scoring. Cronin, who was Garryowen’s best player on the day, has been rewarded for a great season with a Munster contract next year.

Both sides were scrapping for advantage up front, but some serious hits on both sides meant a very even contest. Lansdowne then set up a good line-out position and drove into the Garryowen ’22; play went through several pick-and-go phases before the ball was sprung wide. Connacht Academy winger Adam Leavy benefitted from a long skip pass to slalom over near the corner for a 5-3 lead to the home side on 24 minutes.

Eamonn Mills, who was given a stern examination by the Garryowen halves as they kicked frequently through the game, was taken out in the air in the 28th minute after an excellent catch. From the penalty, out half Scott Deasy put the ball into touch 30 metres from the visitors’ line.

Following good work by winger Foster Horan and Brennan, Garryowen were pinged for off side and the ever-reliable Deasy nailed the three points from 27 metres and Lansdowne were 8-3 ahead after 29 minutes’ play. In goaling the penalty, Scott Deasy also broke the 200 points barrier for the season in the League and set a new Lansdowne AIL record in the process.

Garryowen stormed back, and Cronin reduced the gap to 8-6 in the 32nd minute as the visitors enjoyed a period of domination. Mills was again superb as yet another high ball rained down, and his counter-attack off it relieved pressure on the home defence.

The relief was only temporary, however, as the men in light blue swarmed forward again and put Lansdowne under severe pressure. The home defence was magnificent, however, with No. 8 Willie Earle and flankers Aaron Conneely and Jack O’Sullivan putting in a mountain of work, while the midfield defence was also strong.

A vital turn-over on 40 minutes saw the Headquarters side attempt a break-out from their own line, but Garryowen regained possession. In the face of tigerish defending, the Garryowen attack was frustrated several times until, finally, the ball was spilt over the line and their great chance to go in at half time leading was lost with it.

Not for the first time this season, Lansdowne proved the dominant force in the third quarter of the game. Straight onto the offensive, Adam Leavy took the ball through and play was eventually brought to the Garryowen posts. Several thrusts later, the ball was turned over and a great chance to start the second half with a bang went abegging.

But not for long. In the 43rd minute, Deasy played a delightful chip over the Garryowen midfield defence and re-gathered the ball under pressure on the ten metre line. He made ground before drawing the Garryowen full back Andrew Byrne and setting his supporting scrum half Alan Bennie free from 30 metres out to score a beautifully executed try. Deasy obliged with the extras and the home side were 15-6 ahead.

Three penalties in quick succession on 47 minutes (scrum); not releasing in the tackle (49) and 51 minutes (high tackle) saw Cronin convert two penalty shots at goal and he had dragged his side back into contention at 15-12.

This was as close as his team was to get, however – a great turn-over and counter attack led by Foster Horan saw a penalty won. Deasy found touch deep in the Garryowen ’22. A rolling line-out maul was then collapsed by the visitors, and the referee had no hesitation in heading under the sticks to award a penalty try on 55 minutes – 22-12 to Lansdowne!

Greg McGrath came on for Ian Prendiville at tight head on 58 minutes, the captain having missed some game time in recent weeks through injury. Scott Deasy was then once more involved, his lovely off-lay sending Willie Earle crashing down the middle as Lansdowne again seized the initiative.

Another scrum penalty saw an attacking line out deep in Garryowen territory. After a rolling maul and several pick-and-goes, powerful hooker Tyrone Moran drove over the line for the clinching try, the conversion of which was again neatly dispatched by Deasy for a 27-12 lead after 65 minutes.

To their credit, Garryowen heads didn’t drop, and they subsequently enjoyed their best period of the match. Cronin was again to the fore, his neat break supported by the Light Blue’s impressive open side Jack Daly – only 19 years old. From the subsequent maul under the posts, Lansdowne second row Josh O’Rourke was yellow-carded for side entry.

Seeking to press home their numerical advantage, the visitors took a scrum option but were denied by excellent Lansdowne defensive work. On 74 minutes Lansdowne won a good turn-over but conceded a line-out 18 metres from their line. They were successfully frustrating Garryowen through stern defence, and the clock was running down.

A further penalty to Garryowen saw a line-out maul 5 metres out from which sub hooker Liam Cronin crossed for a try which was excellently converted by his brother Niall. Now it was 29-19 with four minutes of regular play left on the clock.

Yet again Garryowen surged forward, and yet again they were repulsed by heroic Lansdowne defence. Second row Jack Dwan made a vital intervention when he got back to a grubber kick on his own ’22 and regained possession under heavy pressure.

Lansdowne launched a final attack on 80 minutes through a great kick to the corner by sub scrum half, Charlie Rock. This was followed by a pressure-induced turn-over as Garryowen, going for broke, conceded a five metre scrum on their ’22.

Lansdowne’s driving play through several phases then saw Rock sell a lovely dummy before releasing Leavy to the line for his second try.

Deasy once again added the conversion and the Headquarters side were heading for the final against title holders Cork Con next Sunday at the same venue by a 36 point to 19 margin.

While their side had the better of affairs in the recent Bateman Cup final, Head Coach Mike Ruddock and his assistant, Mark McHugh, will be under no illusions that Cork Con in the final will be anything but a titanic struggle. The double-holders will give anything to retain their title and their vast experience of such occasions will be brought to bear in the final.

It promises to be a memorable match, and Lansdowne will need every and all support the Club can muster if they are to prevail. This is a great Lansdowne team, and a nicer group of young men you will be hard-pressed to find. Help them achieve Lansdowne’s third All Ireland League title in the past five seasons by being there to cheer them home!