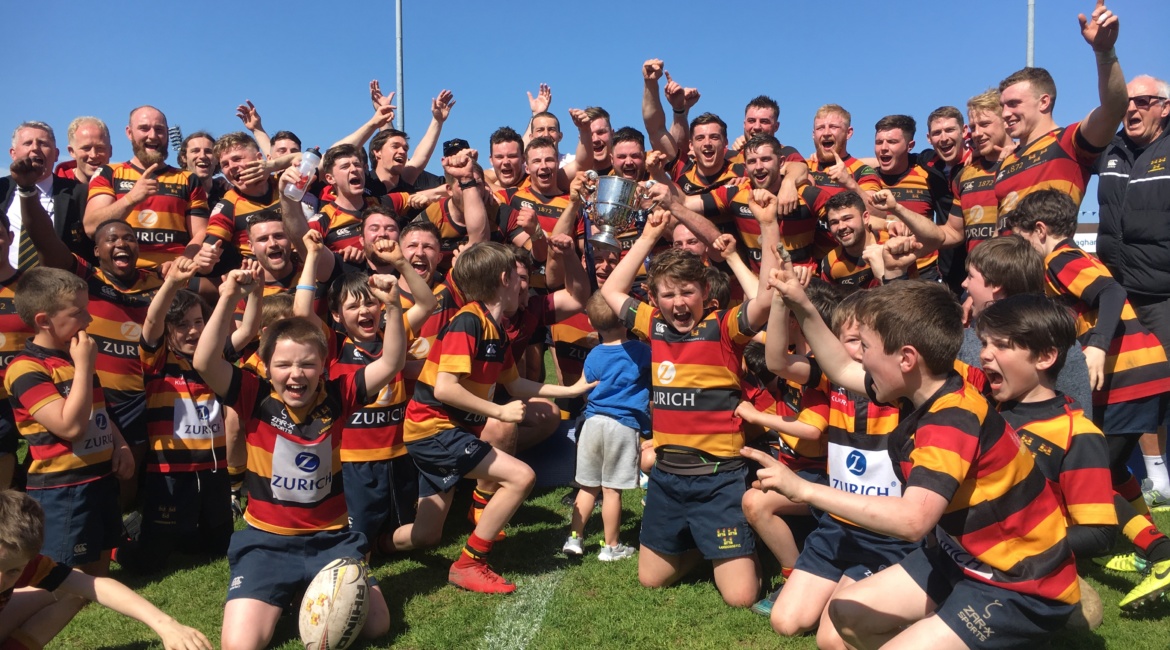 The Bateman Cup competition has been staged on 15 occasions over the 87 years since Lansdowne last won this distinguished trophy in 1931. Reintroduced in its current format in 2011, the trophy itself was presented originally by Dr. Godfrey Bateman in memory of his two rugby-playing sons, Reginald and Arthur, who perished in the First World War.

The Headquarters side therefore headed off with a steely determination to become the first club from outside Munster to secure the trophy since the competition’s reintroduction and only the second side to win at the Leesiders’ Temple Hill stronghold this season.

The match was played before a sizeable crowd in a sun-dappled Temple Hill, with the temptation of watching the game on television (it’s available for download on the RTE Player, btw) followed by the Leinster v. Scarlets European Cup semi-final proving too much of a temptation for all but the most ardent Lansdowne supporters.

A 1:00pm kick off was  a further disincentive, but not to the two teams, who delivered up a full-fronted contest which, if a little scrappy at times, was nonetheless played at full tilt and with great commitment and bravery on both sides.

Con had the slight advantage in the early exchanges, with centre Alex McHenry, son of former European Tour golf professional John and one of several current 7’s internationals on display making an early break, only to be beaten into touch by the ball when he chipped into the visitor’s ‘22.

Con out half Tomas Quinlan, his side’s match-winner 5 weeks ago when Lansdowne last came south and also in last season’s AIL semi-final between the sides, narrowly missed a chance to put his side ahead after three minutes with a penalty from 42 metres.

Lansdowne then went on the offensive, only to concede a penalty and a good attacking position in the 8th minute. Their first serious attacking chance came in the 12th minute, when a neat Harry Brennan outside break saw him put full back Eamonn Mills – who had an excellent match – away down the right only for his inside pass to be intercepted by Con full back Shane Daly, who cleared the danger.

Both sides were guilty of early nerves – the Leesiders’ passes not going to hand and the visitors knocking the ball on as both sides sought to assert themselves.

The Lansdowne front row had the advantage in the scrum, with a penalty count of 4-1 in their favour, but Con stole several of the visitors’ lineout throws. It looked like the first quarter would be scoreless until Con captain, centre Niall Kenneally, popped a lovely ball into the gap for his partner McHenry to cut through. He released to impressive 2nd row Brian Hayes, who sent winger Liam O’Connell away to cross in the corner.

Lansdowne began to edge their way back into proceedings, in terms of both possession and territory. They were inspired by some forceful running by right winger Foster Horan, who made serious yards on several occasions to put his side on the front foot.

Following Lansdowne’s best phase of play, lively scrum half Alan Bennie took advantage of slack Con fringe defence to break into the ’22 and chip ahead. In a race to the line he beat the covering Daly to the touch down for a real opportunist’s try.

Level at 5 a-piece after 27 minutes, Con brought on Munster squad men Evan Mintern and, just after the break, Darren O’Shea, availing of the rolling subs rule. This was in an effort to subdue the Lansdowne eight, who were hunting well together, inspired by No. 8 Willie Earle, 2nd row Josh O’Rourke, hooker Tyrone Moran and flanker Aaron Conneely, who topped the day’s tackle count by a long way.

Bennie made another nice break down the left in the 34th minute, supported by Willie Earle, and the ball was moved right, then back left, only for what looked to be a clear overlap chance to be lost when centre Harry Brennan lost control of the ball.

Lansdowne’s efforts did not go unrewarded, however, as the home side conceded a penalty 32 metres out for taking out the line out lifter. Captain on the day Deasy made no mistake as he took his side into an 8-5 lead, a lead which the Leinstermen were not to relinquish for the rest of the afternoon.

The half ended with the Lansdowne scrum, which had former Leinster Under 20 props Marty Mulhall and Greg McGrath exerting considerable pressure on the Con front row, winning a third scrum penalty as they asserted their dominance in that important phase of the game.

Much has been written in past seasons of Lansdowne’s third quarter strength, when the opposition begin to tire and the pace and strength of this superbly coached and conditioned side begins to tell.

This was the case again on Saturday, when the Headquarters side upped the tempo and started asking serious questions of the cup holders. Con initially were on the attack but were repulsed following a great turn over just inside the visitors’ ’22. When the Con backs were pinged for crossing, Scott Deasy took advantage with first a Garryowen, which was recovered, and then a beautifully flighted cross-kick which Mills gathered on the bounce.

The full back made ground down the right and passed inside to winger Horan, supported by Bennie, who took play to within feet of the goal line. The ball was temporarily held up by desperate Con defence, only for that master of the hard yards, Josh O’Rourke, to plunge over for the try and a 13-5 lead after 49 minutes’ play.

Seven’s international Ian Fitzpatrick came on for Harry Brennan, who shipped a knock, as Lansdowne pressed home their advantage. Full back Mills put a lovely grubber kick close to the home ’22 on 53 minutes, and the forwards took the subsequent line-out. Mills then placed another great kick into the ’22 and the awkward bounce exposed Con’s covering winger, Rob Jermyn.

Lansdowne left winger Alan Leavy took full advantage of the error to gather and race through for his side’s third try. Lansdowne were now 18-5 ahead, Deasy being unable to add the extras.

Cork Con responded, determined to get themselves back into the match. Led again by centre McHenry, they went through several phases, only for the pressing Lansdowne defence to force Quinlan into an error. This was swiftly seized upon by centre Mark O’Keeffe, who showed a clean paid of heels to the pursuing Constitution defenders as he took his intercept home under the posts following a lung-bursting 80 metre dash.

Scott Deasy added the extras and Lansdowne were breathing a little easier at 25-5 with 20 minutes remaining. A breakdown in communications at the back of the visitor’s scrum saw Con attack down the left, however, with Con’s best back, McHenry, again to the fore. The play saw sub back row Darren O’Shea scramble over in the corner as Lansdowne’s defensive concentration for once lapsed.

Quinlan gave his side a glimmer of hope with a fine touchline conversion to narrow the gap to 25-12 in favour of the visitors with 10 minutes remaining.

The door was slammed firmly in their faces in the 75th minute, however; Alan Bennie popped a lovely ball off a line out to the onrushing Adam Leavy coming in off the blindside wing. Leavy slalomed across midfield, beating four despairing Cork Con defenders on the way, before releasing a delightful flighted pass for Mills to cross half way out without a hand being laid on him.

Lansdowne’s fifth try and the conversion by Man of the Match Scott Deasy, who ran the show, sealed the result. Dr. Bateman’s Cup was heading back to Lansdowne Road, as it had done after the first ever final of the competition between the same two sides in 1922, when Lansdowne won 6-5.

Somehow, I think the Late Dr. Bateman would have approved.