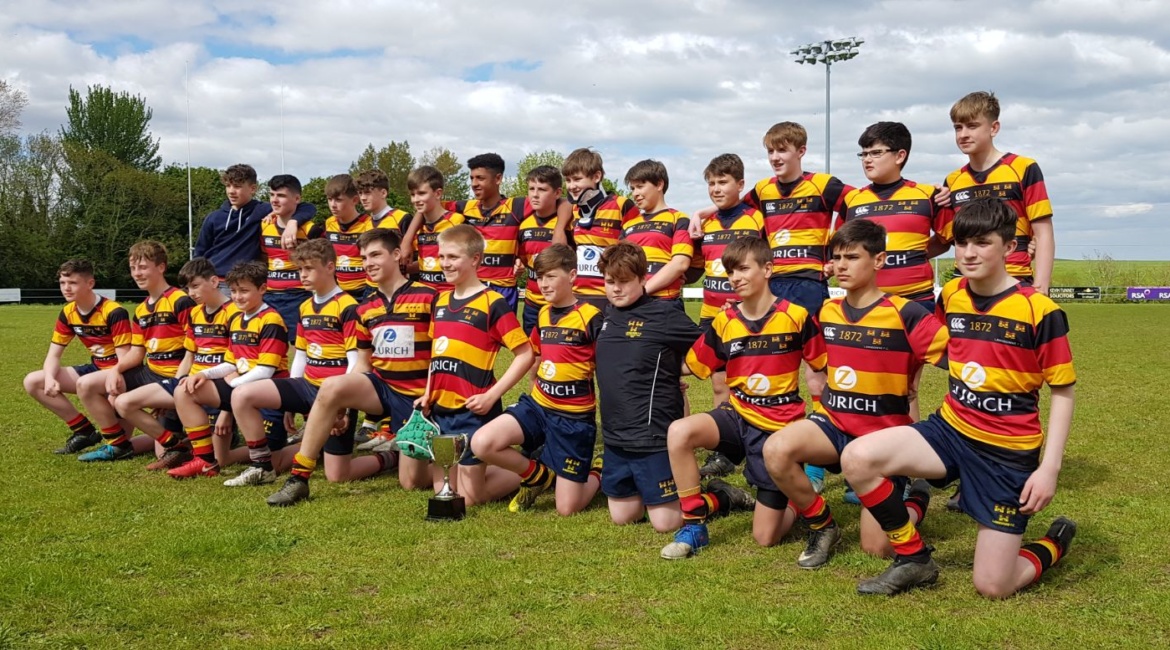 The road to this Final was at times challenging and difficult, however, it was all worth it in the end as the Lansdowne U14’s overcame a very strong and spirited MU Barnhall. All credit to both teams, they left everything on the pitch. Everything.

Lansdowne went 7 – 0 up early on with a well-worked try by flanker Luke McCarroll which was then converted by fly-half Davy Colbert. That opening score may well have prompted some early optimism in the hearts and minds of the Lansdowne supporters, however, MU Barnhall came right back at them, and come back they did.

MU Barnhall put together a clever passage of play through their formidable forwards which, when released to the backs, yielded them a try which was then converted by Daniel Ruane bringing the score to 7 – 7. It was then that all present knew we were in for a fight. Both teams were looking to end their season with some silverware. We braced ourselves for a spectacle. It did not disappoint.

A bruising Lansdowne win (24 – 29) with a season rampant DLSP in the Semi-Final less than 40 hours earlier had to have taken its toll on our boys, and for a while, they were under pressure. Two MU Barnhall penalties later Lansdowne were trailing 7 – 13 thanks to the sublime boot of MU Barnhill’s Daniel Ruane. Things were not looking good as the MU Barnhall boys had their tails up.

Just before halftime, cometh the hour, cometh the man, Davy Colbert. The Lansdowne fly-half during an attacking move just beyond the MU Barnhall 10 meter line, saw an opportunity. He kicked the ball out of hand over the heads of the MU Barnhall defensive line towards the try line. Davy darted through the defenders and chased for all he was worth, hunted by the fastest of the defenders. As the ball bobbled over the try line Davy pounced on it to bring the score to 12 – 13. The defender’s heads went down, it was a turning point. Davy then proceeded to convert his try. 14 – 13 to Lansdowne. Halftime.

The second half was a very nervy affair for both sides with the inevitable ebb and flow of a game bringing the blood pressure of the spectators to new highs. It was then that MU Barnhall struck. Again, their physical forwards ground out the yards. Hard yard by hard yard until finally, the Lansdowne defensive line broke earning MU Barnhall a well-deserved try, and again, perfectly converted. 14 – 20 to MU Barnhall.

As is often the situation, time becomes the enemy. For Lansdowne, this was fast becoming the case. MU Barnhill dug in and defended bravely, heroically even. Regardless of the Lansdowne moves, feints and attacks, the MU Barnhall defensive line held firm. Something needed to give, and it did. Again, it was one of those moments that a game turns on and unfortunately for the brave MU Barnhall, a rush of blood by an MU Barnhall defender resulted in a yellow card.

This was all that was needed for Lansdowne to turn the screw. Lansdowne attacked remorselessly. Fast hands through the centre, side steps, jinking runs, loopbacks, skip passes, it was all pulled out, I believe even the kitchen sink made an appearance. That kind of pressure will eventually deliver a result. And it did. Lansdowne was awarded a penalty try. 21 – 20 to Lansdowne.

Now was not the time for heroic plays by Lansdowne. Win. Win ugly if needed, but win. Now was the time to run the clock down and take the Cup back to HQ.

The closing minutes were agonising, for both teams and both sets of supporters. Standing in the coaching area for Lansdowne, unable to do any more than grip my clipboard and chew my pen, I clearly heard one of the Lansdowne supporters, a Mum of one of the boys on the pitch who was engaged in what more resembled hand to hand combat than Rugby Union, imploring the Virgin Mary herself to intercede and deliver a victory to Lansdowne. Two minutes later that victory was indeed delivered.

Full credit to both teams. It was a magnificent display of skill, wits and nerve. Lansdowne came out on top, this time, but for one or two moments it could so easily have been a different story.

The Lansdowne starting 15 were:

The subs on the day were:

Also, a big part of the squad that helped get us there but were unfortunately not able to play on the day:

Finally, the End Of Season awards went to:

Some End of Season Acknowledgements.

From me and my fellow Coaches and Managers, Ntinga Mpiko and Fergal Cleary (both 1st XV legends), David Colbert and John Nolan, it has been a pleasure and a privilege to be with this squad, many from U6’s up. We have had some wonderful times, great games, epic tours, huge successes and of course the few emotional losses along the way. Every one of those milestones, good and bad, has served in its own way to bring us closer together, as a team and as friends. I firmly believe that’s what helped the team to dig so deep for each other and for the jersey both in the Semi-Final on Friday and then again in the Final less than 40 hours later on Sunday and to weather the storm that would surely have overtaken lesser teams and then to push on to another memorable team victory.

I’d like to celebrate the effort, commitment and involvement of the boy’s parents, without whom none of this would have been possible, from the bottom of my heart, thank you. From helping to organise tours, fundraising, making the traditional sandwiches for visiting teams, tending to the inevitable cuts and bruises, drying the occasional tear (of the coaches!) and above all else, being there, hail, rain and shine to cheer on our boys and the opposition boys, especially during the challenging times this year, you never gave up on us. A finer bunch of supporters we could not have had.

We look forward to welcoming many of the squad back next year as U15’s, and for those of you that can not come back next year due to other commitments, always remember, you have a home for life in Lansdowne. #LFCTID

Good luck to David Colbert in his move to the LFC U11’s, our loss is their gain.
I’d also like to say a big thanks to all the coaches that have played their part in guiding this group of boys from U6’s up to now, your passion, selflessness and dedication helped shape this team and set the foundation for their successes.

Finally, a huge thanks to Lansdowne FC itself, the club, its officers and the untiring Minis and Youths committee for providing the infrastructure, support and environment for this group of exceptional boys to learn and to grow as individuals and as a team. The boys may not recognise it just now, but in the fullness of time, the bonds created between the boys and the club will be fully appreciated and will bear fruit in many ways in the years to come. 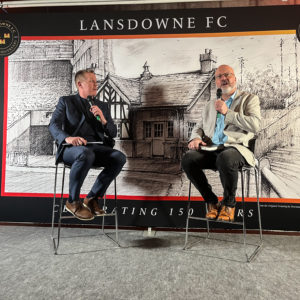 Ivar McGrath on Lansdowne FC- A History – Near FM 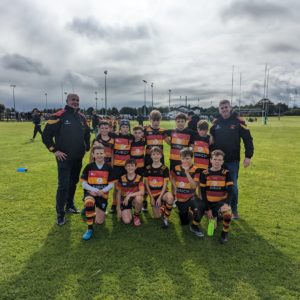 LFC Under 12s trip to Limerick

Hugh Cahill having a chat with Sean Fitzpatrick and Dan Sheehan.

Congratulations and best of luck for the rest of the season. See you for the rematch in April.

Penalty for Hinch. Going for the posts….

We’ve got ourselves one hell of a ball game.

Reply on TwitterRetweet on TwitterLike on Twitter4Twitter
Load More...

Hugh Cahill having a chat with Sean Fitzpatrick and Dan Sheehan.

Congratulations and best of luck for the rest of the season. See you for the rematch in April.

Penalty for Hinch. Going for the posts….

We’ve got ourselves one hell of a ball game.