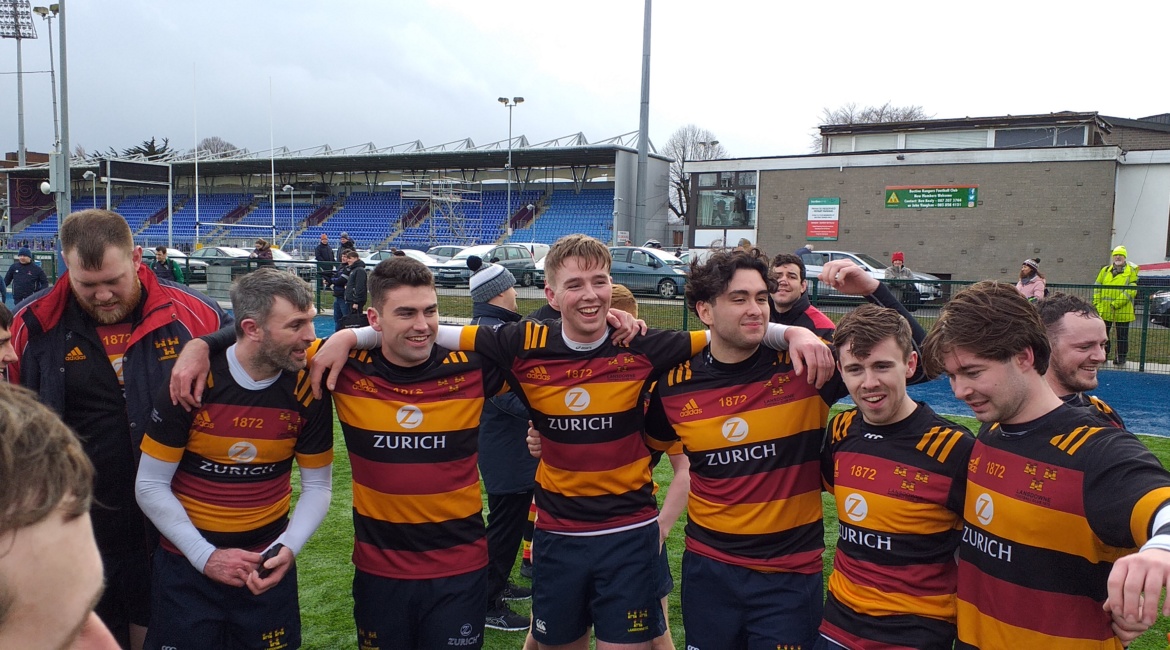 Even a late arrival to this match, like this reporter, could see it was a game played with great pace and spirit, both sides defying the elements to put on an exciting contest.

With five minutes to go to half time, Wesley had opened the scoring with some assortment of tries and/or penalties, bringing their tally to 12, while we were hot on their heels with 10 points, a converted try and penalty. When the subs and various attendants on the side-line were asked who scored our try, three people replied, “I did!”

Whoever did the scoring, it was a good showing for a half playing into a strong gale.

The second half mostly belonged to Lansdowne. We had an embarrassment of riches of intelligent half backs on the pitch – John Delany, Danny Hogan, Rob Kelly – all using the wind to keep the Wesley team pegged back in their 22 for most of the half. Oh, and Aaron Grogan also came on later too…

Among the forwards, notable performances came from Adam Curry who dominated the loose play and kept our scrum together at number 8.  Also, great to see Matt Groves play a full game, bringing some controlled aggression and subtle scrumming techniques to bear (Matt, if you’re going to handle in the scrum, wear a long sleeve jersey – no one could miss those tatts!). Cathal McNamara also put in a Herculean shift for a man of his age and new parental status.

Danny Hogan slotted over a penalty ten minutes into the half, making it  12 – 13, but it was Adam Curry’s try that brought us to 12 – 18 with 20 minutes to play and it seemed like it was the hosts that had the mountain to climb.  But it was tough going for both sides and fatigue started to show.  It became a bit like musical subs, with players coming off and then on again at regular intervals. Full marks to Cathal “Boyler” Boyle, who played in five positions, forward and back, before finally taking one for the team and succumbing to a yellow card in the last minute.

Wesley continued to play with great spirit – and good sportsmanship, it has to be said – and worked their way laboriously up the pitch. They camped on our line for what seemed like an age and it was only consistently brave defence – and a conspicuous absence of penalties – that kept them from going over the line. Danny Hogan was as strong in defence as he had been earlier in attack. But with their tenacity and we a man down, it looked like a try was inevitable. The shouts from the sideline as the final whistle drew close, were “keep them out to touch”. And so it was that the hosts’ attack finally bore fruit with a try five metres in from the touchline.  17 – 18 and a tough conversion to follow.

He’ll never get it from here, will he?

The Wesley kicker struck the conversion beautifully and it was heading between the posts, when God (always suspected He was a proud Lansdowne man!) played a hand and let a gust deflect it to hit the upright!